Is napkin folding an activity of the past? Well, yes and no. A few decades ago what people who entertain wouldn't give for that perfect napkin configuration that looked like, say, a bunny for Easter dinner. Those days are certainly gone and I'm happier for it. Who needs a bunny on the table that reminds me of a circus clown making kids balloon figures while twisting the balloon into shape. Remember that? The horror still haunts me. Not sure if it was the clown or the balloon.

According to Charlotte Birnhaum and Joan Sallas, who co-created a history of napkin art in their book titled "The Beauty of the Fold", they found that the change from folded cloth to folded art occurred in 16th century Florence, Italy. It had become fashionable for the wealthy to wear ballooned style sleeves and billowing clothing. So, everything, including napkins, became larger and larger. So, complex and sophisticated designs started to appear in folded cloth napkins.

Starched linens were folded into large table centerpieces known as "triumphs". They could characterize anything from mythical beasts, to castles and trees. See two example below. 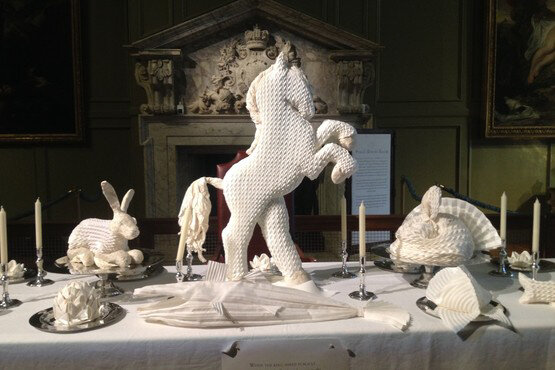 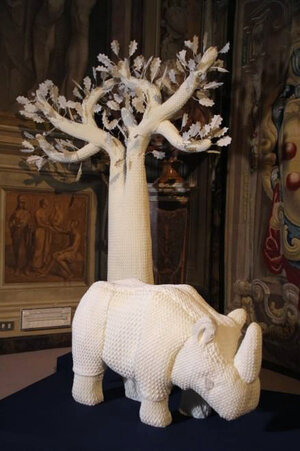 "Soon these detailed napkin sculptures spread throughout European courts, explains Birnbaum. They became status symbols, and the depth of their artistry became an ongoing competition among hosts. Butlers were sent to Rome and Florence to learn the latest techniques."

Then in the 80s and 90s the designs became uncomplicated, a bit. See the napkin folding bunnies and waterlily designs below. Today we look for ways to simplify and improve the quality of our lives. This is the same when you are entertaining. Keep it simple and as stress free as possible. So, back to our original question. Is napkin folding a thing of the past? I would argue that it isn't entirely. However, the designs today are simplistic in form and easy to create. Don't overthink it nor spend a generous amount of time setting the table.

See below for a few easy examples of napkin folding that emanate a big punch at the table. The following is a simple and chic design that is timeless and easy to pull together. Use these simple designs at your next gathering to welcome your guests to your table and your home.